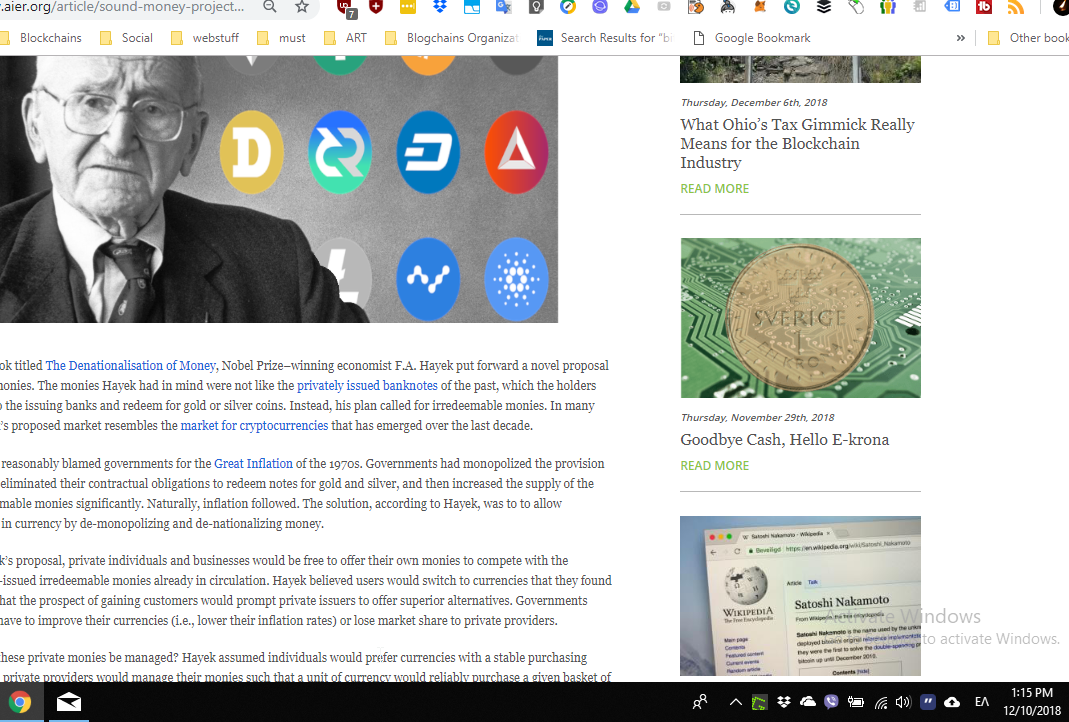 In a 1976 book titled The Denationalisation of Money, Nobel Prize–winning economist F.A. Hayek put forward a novel proposal for private monies. The monies Hayek had in mind were not like the privately issued banknotes of the past, which the holders could take to the issuing banks and redeem for gold or silver coins. Instead, his plan called for irredeemable monies. In many ways, Hayek’s proposed market resembles the market for cryptocurrencies that has emerged over the last decade.

Hayek quite reasonably blamed governments for the Great Inflation of the 1970s. Governments had monopolized the provision of currency, eliminated their contractual obligations to redeem notes for gold and silver, and then increased the supply of the now-irredeemable monies significantly. Naturally, inflation followed. The solution, according to Hayek, was to to allow competition in currency by de-monopolizing and de-nationalizing money.

Under Hayek’s proposal, private individuals and businesses would be free to offer their own monies to compete with the government-issued irredeemable monies already in circulation. Hayek believed users would switch to currencies that they found better, and that the prospect of gaining customers would prompt private issuers to offer superior alternatives. Governments would then have to improve their currencies (i.e., lower their inflation rates) or lose market share to private providers.

How might these private monies be managed? Hayek assumed individuals would prefer currencies with a stable purchasing power. If so, private providers would manage their monies such that a unit of currency would reliably purchase a given basket of commodities. A stable money is attractive because it eliminates the negative return on the money users hold, sometimes called the “inflation tax.” It lowers the risk of making long-term contracts in money units. It also eliminates the unnecessary price adjustments that come with inflation and makes it easier to compare prices over time.

Second, Hayek seems to underestimate the importance of network effects. The usefulness of a particular money depends crucially on the number of others willing to accept it. Most of us would be reluctant to switch to a better money that few people around us use. (Otherwise Americans would be using Swiss francs.) The costs of exchanging currencies mean that it would be costly for an employer to pay wages to different employees in different currencies, or for most employees to convert their salaries each payday. We are more likely to see convergence on a relatively reliable common money unit than we are to see the scenario Hayek envisions, in which dozens of distinct monies simultaneously circulate in the same area.

Finally, Hayek does not seriously enough address the issuers’ temptation to renege. In order to gain market share, private issuers must promise to manage their monies well. But, once a money is widely used, the issuers have a strong incentive to break that promise. Indeed, since issuers need not redeem their outstanding notes, they might expand the supply without limit.

However, most cryptocurrencies clearly differ from the currencies in Hayek’s vision in that they do not promise a stable purchasing power. Instead, to overcome the problem of reneging, the issuers credibly commit to the quantity they will issue. They pre-program an issuing schedule into the cryptocurrencies’ code. The supply of bitcoin, for example, expands by a predetermined amount in 10-minute intervals. Thus we already know how many bitcoin units will exist at this time next year. Pre-programming removes the ability to renege later, when the incentive to do so is strong.

A few cryptocurrencies, like tether, aim to fix their exchange rate against the dollar or the euro. Others fix against gold or aim to stabilize purchasing power against goods and services. However, these “stablecoins” have failed to gain much market share to date. Perhaps few individuals want a coin that lacks the potential for upward appreciation, or perhaps network effects discourage switching to what might be a superior medium of exchange, or some combination of the two.

The market for cryptocurrencies is still pretty new. Bitcoin launched just under a decade ago. New currency ideas continue to be developed and launched. So it is probably too early to say how things will shake out. Hayek was clearly onto something with potential when he proposed allowing private alternatives to poorly managed government monies. But as Hayek wrote elsewhere, competition is a discovery procedure: we need to let it work to reveal what types of money people most want and how best to provide them. As cryptocurrency pioneer Nick Szabo has written, the unsettled questions about cryptocurrency “can only be settled by actually fielding them and seeing how they work in practice.”

William J. Luther is the Director of AIER's Sound Money Project and an Assistant Professor of Economics at Florida Atlantic University. His research focuses primarily on questions of currency acceptance. He has published articles in leading scholarly journals, including Journal of Economic Behavior & Organization, Economic Inquiry, Journal of Institutional Economics, Public Choice, and Quarterly Review of Economics and Finance. His popular works have appeared in The Economist, Forbes, and U.S. News & World Report. He has been cited by major media outlets, including NPR, VICE News, Al Jazeera, The Christian Science Monitor, and New Scientist.

One Reply to “Cryptocurrencies and the Denationalization of Money”